I have a lot to be thankful for this year. The pleasures of being back among family and friends. My goofball cat who has adapted quite well to the move and now keeps the howling to a minimum. My honey, who does the dishes and takes out the trash and rubs my feet when I get home for work and appreciates everything that I cook. My phone, with its camera and the capacity to upload pictures to the internet. (Fingerless gloves for Melisa, Collinette Jitterbug)
I hope everyone has a wonderful Thanksgiving.
Posted by ro.bin at 2:21 AM No comments:

I burned my hand tonight while making dinner. 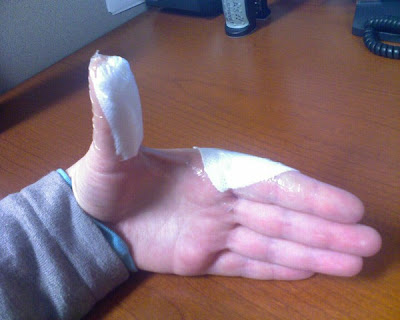 I made some supa-tasty roasted salmon with herbs for dinner. When it was time to flip the salmon fillets, I pulled the cast iron skillet out of the oven with an oven mit, flipped one piece, then before I flipped the second piece, I went to move the pan slightly and reached without thinking for the handle (which was just out of a 475 degree oven) with my bare hand. Yowza! There's a nice sized blister where my pointer meets my hand, and my entire thumb is red. It hurt a lot for a couple of hours, but with some lidocaine gel, it's feeling better now. I'm blaming my sleep deficit for this bonehead move.
Aside from the pain, I'm mostly concerned about how this is going to affect my knitting! I started the Hemlock Ring Blanket with the Cascade 220 superwash a couple days ago--and I love knitting it! Initially I started with US10 needles. The pattern calls for 10 1/2, but I didn't feel right about using a needle this big. But even the 10s were too big! The fabric was looking much too loose for my liking. So I frogged after about the first 20 rows and went down to size 9s and I'm liking it much, much more. This blanket is great because it combines lace knitting with worsted weight yarn--> it goes so fast! And the pattern is so beautiful, it's great to watch it come together. Doesn't the center look like a beautiful sunflower? I'll definitely be making more of these!
Posted by ro.bin at 2:48 AM No comments:

Remember those vests I made in August? This might jog your memory: The red one for the 2-year-old needed to be lengthened and I thought I would talk a bit about how I did that. I did the bulk of the surgery two months ago late at night, so pardon the crappy late-night photos, thanks. Next, I took some contrasting yarn on a tapestry needle and threaded it through the stitches two rows above where I'd picked up stitches with the needle. Next, I snipped a stitch in the row between the yarn and the needle and unraveled the stitches all around in this row (what a pain!) so that I had two separate pieces. Once I had knit two pattern repeats onto the ribbing section, I used kitchener stitch to graft the new section with the stitches that had previously been on the white tread--by far the most time consuming part of the whole bit. I see a bit of bulging, perhaps my knitting was looser on the addition, and despite my best effort, the grafting was a bit wonky in places. But I'm still pleased with the end result. A few washes and I'm hoping the addition won't be noticable at all. The red vest made it back to its destinee a few weeks ago, but last I heard, his mom couldn't get him to hold still long enough to try it on. I trust that the 2 inches that I added will be sufficient to get him through at least a couple of season's worth of wear.
Posted by ro.bin at 4:56 AM No comments:

My TTL Mystery Socks, which I have dubbed Ketchup Plant Socks. Because they are just the color of ketchup! (And yes, I know the ketchup plant is really the tomato, but whatever.) The yarn is ShiBuiKnits merino sock yarn, which I have used a couple of other times. I like the softness of it and the vibrant color. It's superwash, but I'm not sure how well it actually holds up because I've never kept a pair of socks made from this yarn. I haven't decided yet if I'm going to keep this pair--my sock collection does need some serious revamping. These were fun to knit, and I'm very happy with the way they turned out. I knit them almost entirely while at work--only the toes were done at home. The only thing that's holding me back from keeping them is the pattern. I think I'm more likely to wear plain ol' handknit socks than socks with a fancy pattern like this. Which brings me to my newest knit-at-work project! Some simple socks made from pretty self-striping Opal I bought last week at Weaving Works. Those machine printed stripes are oddly entrancing. I should be done with these socks in no time.
Posted by ro.bin at 2:37 AM No comments:

It's full-on fall here. I think I saw the sun once or twice last week, but we've entered the gray zone--those 8 or so months where it's overcast nearly every day. Not that it matters for me. With the onset of Standard Time two weeks ago, by the time I wake up, the sun is already on it's way down. Despite the gray skies and early dark, I have had a few lucky moments to take in the fall colors. I thought I would miss the changing of the leaves once I moved back to the Evergreen State, but over here on the East Side of Lake Washington, where rapid sprawl (and its bff clear cutting) has led to the planting of many deciduous trees, I've gotten a few eyefulls of beautifully colored leaves. :) And in time for the cooler weather, I've got a progress shot of the Buncha Squares Blanket! (I swear the pink doesn't look so pukey in real life!)
I've made even more progress since that pic was taken and now have only 6.5 more blocks to put the single-color borders on. Not a small task, considering the solid-color border doubles the weight of the block, but I've started to see the light at the end of the tunnel on this garter stitch slugfest. One thing about this blanket, it has certainly reinforced my love for Cascade 220. To prevent any 220 withdrawal once I finish this blanket, I ordered some Cascade 220 superwash in a lovely stone color to make this blanket for a pregnant friend.

In non-knitting news, let me just say that I LOVE THE KING COUNTY LIBRARY. Since moving to Bellevue, I've joined this library, the 2nd largest library system in the country, and I must say I have been impressed by their music collection. In two weeks, I've checked out 14 CDs that have been on my Listen-To list for quite some time. Yea! I also check out a book, thought I haven't been motivated to read much of it yet. I think I need to start utilizing their audiobook services. We all know it's a challenge to read and knit.

Stay tuned, next on the blog, my TTL Mystery Socks--revealed! And a belated birthday gift for my sister.
Posted by ro.bin at 12:17 AM No comments:

We interrupt the silence to bring you...

In lieu of yarn content (I've been too lazy to upload pictures), here, watch this awesome stop motion claymation video for the song "Charlie Darwin" by the Low Anthem. It's a beautiful, meditative song.

The character in the video is wearing a little crocheted sweater. Does that count as yarn content for this blog?

I did order more yarn for the Buncha Squares blanket, so that might be done sometime soon. I took a picture of the progress. Maybe you'll see it soon. :-P
Posted by ro.bin at 5:02 PM No comments: