I made my second visit to East Side Stitchers tonight and finished up the first Angee sock. I was hesitant to go to the sit n knit group because I really don't like getting together with a bunch of strangers. I almost turned around in the parking lot, but the thought of wasting gas forced me inside. And I'm glad I went. I didn't speak very much, but it was nice to sit with a large group and knit. Once I memorized the lace pattern, the knitting went very quickly. The second sock should be even faster (since I already know the pattern). These iphone pics really don't do the beauty of the color justice. It's such a pleasing teal-y color. The pattern forms a faux-cable braid. I'm *this* close to being done with the Buncha Squares blanket. I need to weave in ends on 2 more squares (each square has ~16 ends) then I need to sew the squares together. The pattern recipe calls for whip stitch. In my mind, whip stitch doesn't hold as much esteem as matress stitch, but it sure is faster to do, so I'm tempted to use it. I'm also contemplating crocheting them together, but I don't think I'll go this way.
Posted by ro.bin at 3:18 AM No comments:

I've chosen the Angee pattern for my first pair of Sock Challenge socks. This pair is relatively simple-looking, compared the other patterns in the book, and I think it will be a good one to ease me into knitting all of the socks in this book. Like I mentioned last time, I'm using some Dream in Color Smooshy that jumped out to me from the stash. The color is Blue Lagoon and it's a brilliant slightly variegated teal-y blue color. This yarn lives up to it's name--it is indeed smooshy. :) I've used it a few times before (these socks, this shawlette), but I'd forgotten what a pleasure it is to use. I've done a good amount of knitting since the above picture was taken and so far so good!

NOTE: There are some errata in the book. The errata page from Interweave has one of the errata published, but the other is not. The K2tog in the second round of the leg chart should be an SSK.

In other knitting news, I was called last night to share the knitting gospel. To act as a knitevangelist, if you will. 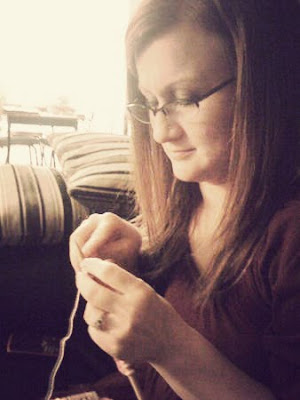 I taught Tamiko to knit! She's well on her way to having a hand-knit dish cloth. :)
Posted by ro.bin at 10:19 AM No comments:

Socks in progress...and a personal challenge

So, blogging from work again. Let me just take a second to say that I'm loving the flickr iphone app! So easy to use! In less than a minute I've taken a picture of my project and uploaded to the site. :) Let me also say that I'm impressed with the iphone's camera. Even in low light, the resolution and color of this picture is great. That's my current sock project, some basic improvised socks. I love the color pattern of the yarn. The way the aqua stands out from the dull browns, greens and grays. I've known all along I would keep these socks for myself (a rare occurance). Think of the blue bits as robin eggs sitting in a nest made out of twigs and leaves (the grey/brown/green parts)--how could I not keep them for myself! The cuff is 2x2 ribbing, the leg has a small ribbing detail which continues along the sides of the foot And the heel is a basic slipped stitch heel but with the yarn held in front for the slipped stitches. I like the little bars created by using this stitch pattern. :) These socks are almost done (if I get to more knitting and less blogging, they might actually be done tonight!) and I've decided to give myself a sock-knitting challenge: Knit every* pattern in Cookie A.'s book, Sock Innovation, and use only stash yarn to do it! I've wound of a skein of Dream in Color Smooshy and will start the first pair as soon as the stripey socks are done.

*I made the Eunice socks last year. I may or may not make them again. As of now, this pattern is exempt from the challenge.
Posted by ro.bin at 3:38 AM No comments:

A dear friend had a birthday at the beginning of the month and that meant it was time for a hand made gift. I dug into the stash for my Lamb's Pride Worsted in a lovely purple color and zipped through the spiral rib wristwarmers from Last Minute Knitted Gifts (one of my favorite books). Inspired by these hats, I made a companion for the mitts. I decided to reverse the rib on the mitts so it spiraled in opposite directions. Not necessary, but I like the symmetrical matchiness of having the each hand's mitt either spiral to the midline or away from it. I also made a grocery tote using this great tutorial over at Sew Mama Sew. I'd planned on using some lovely floral decor-weight cotton, but this print seemed oh-so appropriate, and it was half the price of the prettier stuff. I omitted the pocket from the tutorial and there was ample fabric left over to whip up a lunch bag for Raj. I used the same basic directions as the original, just different proportions. I wanted the base to be big enough to fit all the different containers I use to pack his food, so it's something like 6"x7", and 8" tall. He said his colleagues were amused and impressed by my handiwork. Hehe.

And for your amusement, Butters wrapped up as a gift: Before I start sharing some finished objects from 2010, I wanted to do a little recap post of the things I made in 2009. 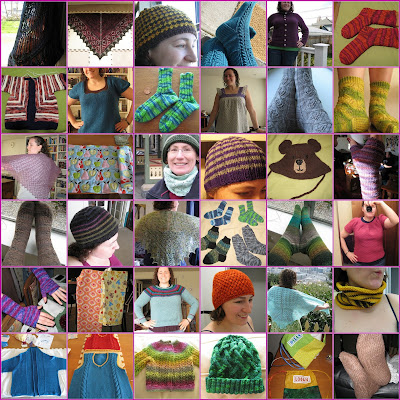 Another project I worked on during this holiday season was pajama pants for some awesome little girls with late December birthdays. Not technically a holiday craft, but it happened during the holiday season, so it gets lumped in with holiday stuff. 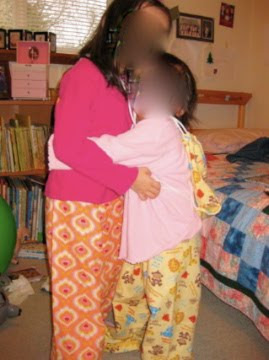 I don't remember the pattern number, but I think it was a Sew Easy or some other name like that. I also made matching drawstring nap sacks. As you can see, the pants came out quite roomy--oh well. This was a fun, easy project. I want to make more other fun easy projects like these.

My biggest holiday craft, by far, was the vest I knit for Raj for Christmas. He picked out the pattern, Alberta by Jared Flood, without any prompting from me. The pattern appears in Wild Fibers magazine, but it was going to take too long to get the magazine--you can't buy it as an instant download. So I improvised my version. I measured one of Raj's store-bought sweater vests, knit a gauge swatch, did some math, and voila! I used Rowan Felted Tweed, 1 ball of the dark brown and 2 balls of the light brown, and Noro Silk Garden Lite, about 2.5 balls, I think. The fabric is a bit loose and drapy, but I'm pleased with the result overall. This was my first foray into steeking, and it wasn't without anxiety, but I'm confident that the result will be stable. I made frequent reference to Eunny Jang's tutorial, and used the crochet method with a 7 stitch bridge. When it was all done, I used mattress stitch to tack down the steek facing. The knitting was finished on December 23, the vest took a quick bath, got spun out in the washer spin cycle, then dried overnight. I stitched down the steeks in the car on the way to Christmas Eve dinner so that Raj could wear it.