Last week while hanging out with friends from college, one of them was wearing this cap: 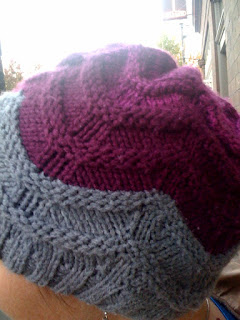 I was fascinated by the color choice and the pattern of the hat. So fascinated that I snapped a pic of the hat. This hat has been floating around in my head all week since then. So yesterday evening I set out to recreate it. I studied the blurry iphone pic and made notes, and counted stitches and made notes. And this is my result: 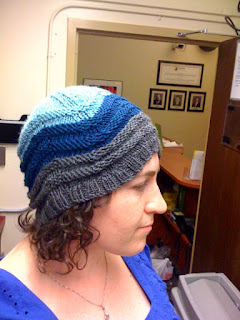 I like the hat I made, but I'm a bit disappointed that it's not a perfect replica of the original. Where I think it went awry:

I'm going to try again. I used size 6 needles for the band and 8 for the rest of the hat. I'm happy with this. But I might try using size 9 for the bulk of the hat. And I'll try adding in that 5th row in the stockinette sections.

It's after 2am on Thursday...and here's this week's WIP Wednesday! Sorry it's delayed, but I'm sure the awesomeness of this post will make up for the tardiness.

First up! The Katarina cardigan is off the needles! Temporarily, anyways. 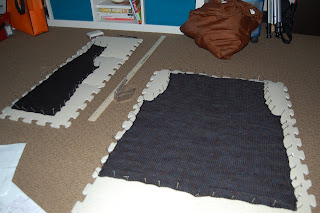 I'm in the process of blocking the pieces, then I have to seam it up and work the collar and sleeve cuffs. Kinda worried I might run out of yarn. I have maybe 1.5 skeins left. We shall see.

Next up, the TTL Mystery Sock. Coming along nicely. Last week's clue was the heel flap, which btw seems really long to me--I didn't even do all the rows called for in the pattern and I'm still thinking it's too long. Oh well. This is a fun pattern. Maybe I'll make another pair sometime. 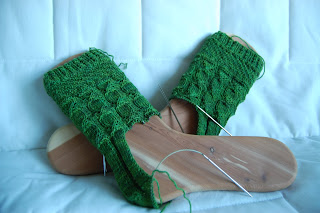 Sunday, after the sweater was off the needles and I finished the heels on those mystery socks, I needed a new project stat before going to work. Thank goodness I rememberd to grab this yarn and needle because Sunday night at work was dead; so dead that I watched a movie AND 4 episodes of the Office (Season 2; IMHO, the best season) on my phone (yea for the Netflix app!) and got lots of knitting done. 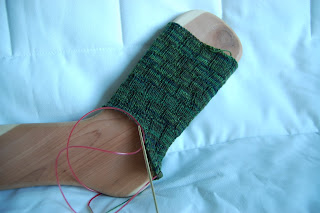 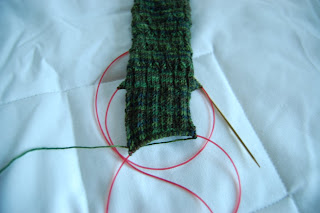 Finally, I dug the baby sweater I started while we were in Maui out hibernation in the hopes of finishing it. I put it away when it was probably more than 95% done, I just wasn't sure how to end it. Like a novelist who just can't decide on the end of the book...hehe. 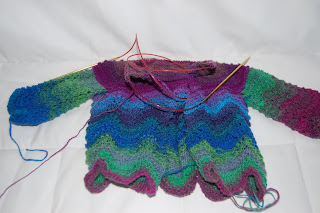 Well, I started working on it once I got to work tonight and I'm proud to report that it is now off the needles! 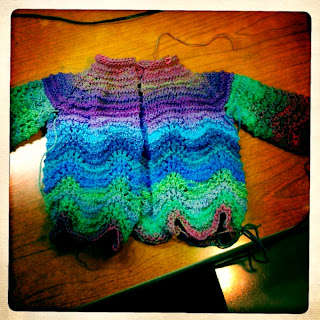 I just need to graft the underarms and wear in the ends and it will be done. I've decided to leave it without any sort of closure. I thought about putting ties at the top but nixed that idea. I heart Noro. And I heart the hipstamatic app.

I did some other crafting yesterday before coming to work. Hopefully I'll be back soon to tell you about it!

I took a walk this morning. Fall is coming to Ballard. :) 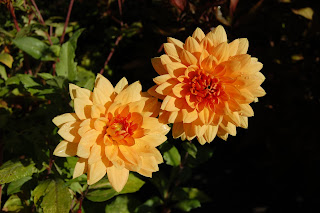 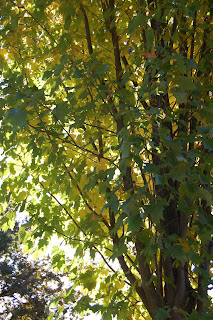 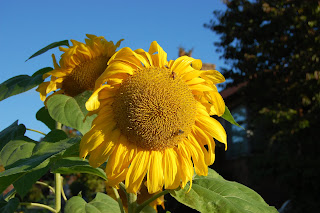 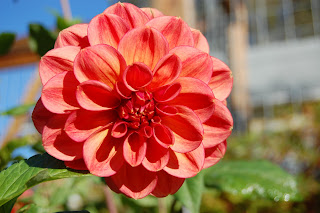 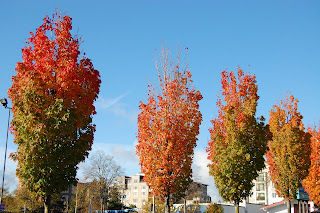 In the nick of time!

There's still a bit of time left to get a WIP Wednesday post out on Wednesday. So, briefly: 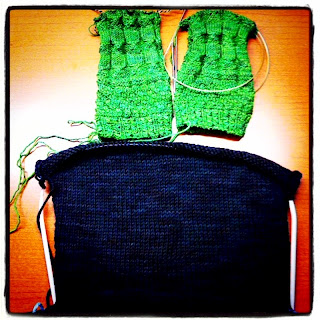 I'm nearly done with the 2nd clue of the TTL mystery socks. I'm liking it so far. I had been working both socks simultaneously, but that was proving to be a bit of a slogfest (I think the part that slowing me down was having to change yarn strands each time I got to the other sock). Since I separated the socks, things have gone much faster. I'm enjoying the pattern enough, though I have some concern about the finished size of these puppies.

Still plugging away on Katarina. What you see is the first sleeve. I've got about 7 or 8 inches done, I'd estimate. I just finished the last increase. HOWEVER, I may add another increase or two. I'm worried that the sleeves will be too tight on my muscular biceps (ha!).

That's all in the way of actual progress for this past week. I have LOTS of things floating around in my head, though. The advent of cool weather here has really stimulated my creative neurons. Hopefully I'll get some free time this weekend to get some of my ideas going.
Posted by ro.bin at 11:12 PM No comments:

Yesterday evening I whipped up a quick wheat warmie for a friend at work. This project makes an easy, literally warming gift. 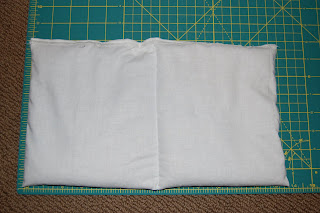 I sewed up the sides of the piece, filled it right side out then put a seem down the middle of the pouch to help keep the wheat berries evenly distributed. I filled the wheat berries from the open long edge, threw in a small handfull of whole cloves into each side , then just folded it over about 1/4" and topstitched to close it up. 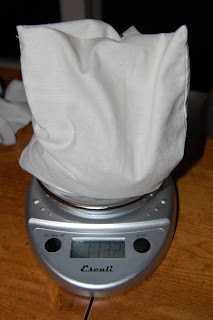 As you can see, I used 1 lb. 13 oz. of wheat berries in this wheat warmie. Now, why whole cloves? Well, the wheat berries on their own, when heated in the microwave, tend to smell a bit barn-ish. The cloves are a nice disguise for that barn-y smell. Some dried lavender would probably also be great.

To make the wheat warmie extra cozy, I made a little case out of flannel. I cut a long strip of flannel, about ~9.5" x ~35", finished the two short edges by turning them under and stitching. Then folded the fabric with right sides facing--first about 7 inches from one end, then about 13 inches from the other end, so that the shorter flap would end up on top when turned right side out. 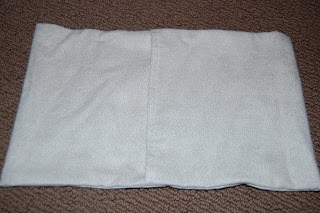 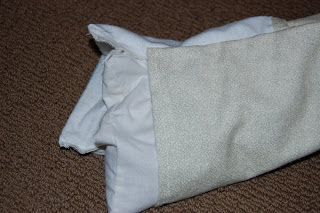 Then flip the shorter flap back over. Et voila! 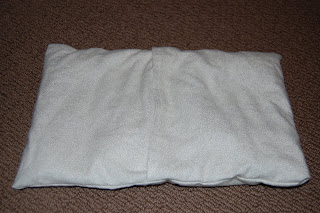 To enjoy the warming wonders of a wheat warmie, microwave for 2-2.5 minutes.
Posted by ro.bin at 9:27 PM No comments:

The main WIP continues to be the Katarina cardigan. I've returned to where I was pre-dye lot debacle, currently about 1/3 done with the second front section. I've got the yarn wound for the sleeves--hopefully I'll get to them tonight at work. 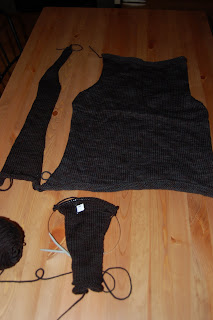 As an aside, remember when I mentioned how cool it was to learn the Bias Bind Off? Here's what it looks like--this is the top of the first front section. Look at that neato, almost-smooth bound off edge? :) 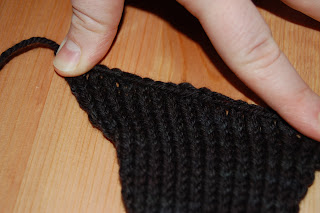 My other WIP is the TTL Mystery Socks. I've got a blurry iPhone pic up on Ravelry, if you want to see. :) I'm using Dream in Color Smooshy in a lovely leafy green color (?Happy Forest--I can't remember exactly what the shade is called). I'm awaiting the release of clue #2 on Friday. I made the TTL mystery socks last year and enjoyed the suspense of not know what comes next.
Posted by ro.bin at 9:10 PM No comments:

Houston, we have a problem...

And that problem is dye lot. Ugh! 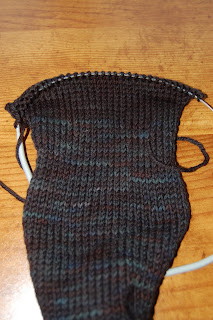 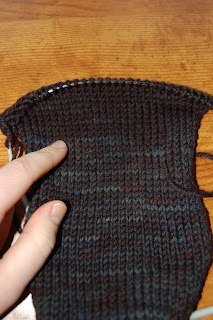 From what I can tell, this yarn either doesn't have defined dye lots, or that information just isn't contained on the label. :/ I'm working on the second front section, about half way done with it, but this will not work. 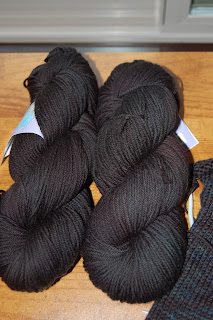 I examined the other 2 skeins I have, but neither of them appears to be a suitable match for the previous skein. The first two skeins seem to be less black--as you can see in the back section of the sweater below, there's lots of slight variation, which I really like. 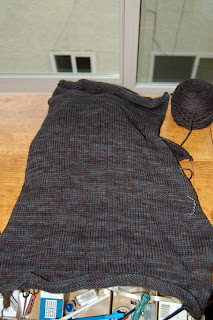 So, here's my plan. I frogged both front sections--the one side that was done, and the other which was half done. Small sacrifice, I think, since I certainly cannot have the two fronts of the sweater looking different from each other--that is NOT my look. I'm going to knit both front sections from the same skein. Then I will knit both sleeves from another single skein. Then I will have one skein left to do the collar, and depending on how things work out, maybe I'll throw what's left of this lighter stuff in on the collar. We'll see. 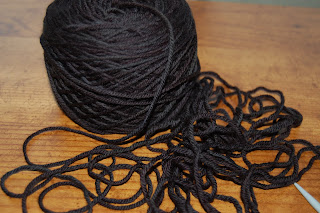 For now, it's back to square 1 for the front sections. (Cue sad trombone sound.)
Posted by ro.bin at 5:33 PM No comments: Flowers spotted in Victoria last weekend
Posted by ro.bin at 9:25 AM No comments: