Working on the Katarina sweater, just reached the top of the back section, and the directions call for using Bias BO. This is a new technique for me.

I love learning new techniques. :)
Posted by ro.bin at 9:03 AM No comments:

The Most Lovely Hat is done. I need to weigh how much yarn I have left over...there must be enough for another hat for myself. Look at this new fabric that I picked up at Ikea last week. The floor person there said it was just put out that morning! It's decor weight. Not sure what I'll use it for--perhaps tote bags. Wood grain tote bag, anyone?
Posted by ro.bin at 6:56 PM No comments:

Two items hot on the needles this week: 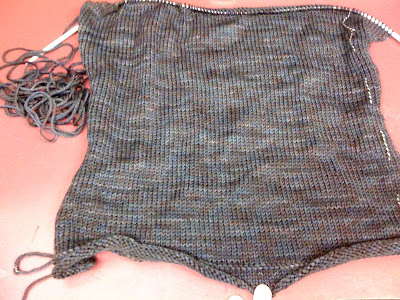 First, the Katarina cardigan is coming along at a nice clip! The official start of Fiber Gallery's KAL is 10/10, but I won't be able to attend the kick off party, and I couldn't wait until then anyhow. :) I just LOVE the yarn--Dream in Color Classy. The iphone actually did a decent job of capturing the color, a mottled black. What you see above is the back up to the point where you cast off for the armholes. All of that is less than one skein of the Classy. The pattern calls for a rolled edge, but that's not my look, so I'm going to do a hemmed edge. I worked the facing one needle size smaller in the hopes that it would be inconspicuous...this is a bit of an experiment 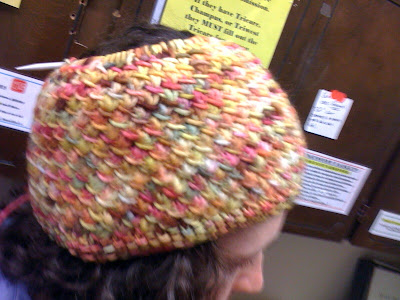 Second, the most lovely hat; significantly less blurry in real life. This Manos Del Uraguay Maxima is one of the most beautiful yarns I have ever seen. I will definitely have to make something for myself with the left over--perhaps just a plain stockinette stitch hat to really show off the colors. In the above blurry pic I am just to the point of starting the crown decreases. And in real life, I'm nearly done with the hat, but as of this writing, it is still a WIP, at least for the next little while. :) The pattern, btw, is Armando (pdf of pattern), a hat pattern I have knit twice before. I'm really fond of the result.

The stocking is up in the craft room closet, in time out. Hopefully I'll have renewed enthusiasm for it in November.

Like: the Manos Del Uraguay I'm knitting with right now. It's lovely beyond my descriptive abilities (even if I wasn't sleep deprived, I'd still have difficulty describing its beauty). 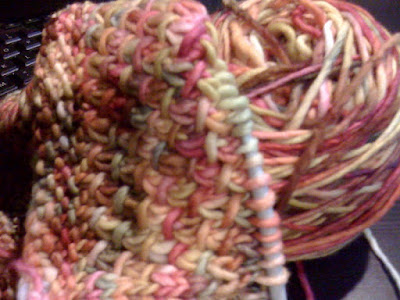 Like: Too Beautiful to Live, my new favorite podcast. I read about the host, Luke Burbank, in one of the Seattle magazines we subscribe to, and I've been listening for about the past week. They put out a new episode EVERY day. And they're entertaining, sometimes informative.

Like: our day trip to Victoria BC on Saturday. What good weather we lucked into! Loathe: did I mention the hives?
Posted by ro.bin at 7:50 PM No comments:

In an effort to increase the regularity with which I update this blog, I'm going to try some day theme type things. So, today's the first WIP Wednesday. (We'll see how long this lasts...)
The chief WIP continues to be the felt/sequin stocking. I'm nearly at the threshold for this project, though--the threshold of how much more I can take. At first, the details and meticulousness of it was nice. But, if I'm not done by the end of this week, I'm going to have to put it aside for a month or so, for the sake of my sanity. It's not beyond the realm of possibility that I could finish it this week. We'll see. 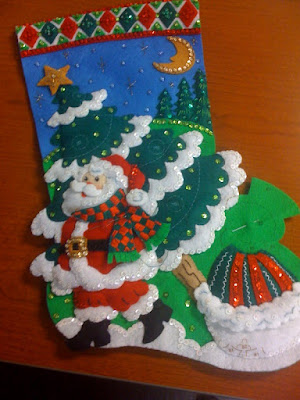 This past weekend I whipped up a little wall-hanging for a friend who is getting married in Africa next month. I used paper-piecing for the letters, and so far I've done a bit of simple machine quilting in the letters. Upon the recommendation of my quilting teacher (hehe), I'm going to do a bit of stipling in the white areas, but this will have to wait a bit--I don't have a darning foot for my machine. 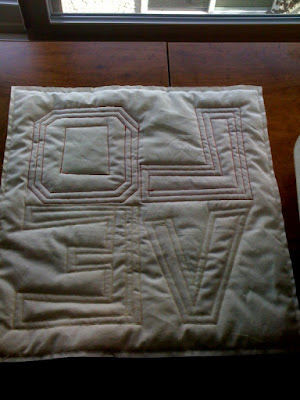 A WIP that's closer to being a FO is a little lace baby sweater I started while we were in Maui. The style is a bit remniscent of EZ's February Baby Sweater, though this sweater was worked from the bottom up. I'm starting to think this sweater might be pre-mie sized. Oh well. I used Noro Kureyon sock yarn, which is so lovely. So maybe it will end up being a lovely sweater for a stuffed bear or something. (Sorry, no pic at this moment).
Finally, though it barely qualifies as a WIP, I have made 2 gauge swatches for the Katarina sweater. A LYS is having a knit-along for this sweater, and I'm excited to participate. I'm using Dream in Color Classy in a lovely black-brown color--I have high hopes that this sweater will turn out to be very wearable; I went against my instincts by picking a neutral color so that I might have a versatile FO. :)
Posted by ro.bin at 2:59 AM No comments:

Now that I'm married and have a house, I decided it was high time I had a custom address stamp, naturally. I started with a simple google search and found lots of examples of standard, customizable (boring) stamps. Then a little lightbulb went off in my head...Etsy!

Who knew there would be so many interesting and cute address stamps?! These are the ones I've favorited so far: Any thoughts on which one I should choose?
Posted by ro.bin at 1:39 AM 1 comment:

As part of my gift for Raj, I made him a pair of socks which I gave to him when we had our "first look." He was surprised and enthusiastically put them on right there and wore them the rest of the night. 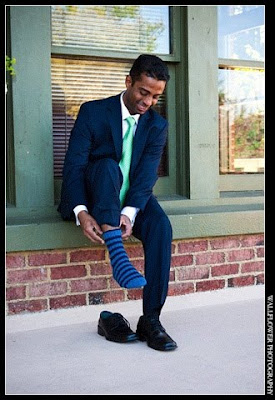 The pattern was just a basic 64 stitch sock, worked in 2x2 rib, with the rib carried down onto to the top of the foot. The yarn is some KnitPicks Risata that had been chilling in my stash for a few years.

I made this simple navy blue shrug to wear at my reception. I modified this free pattern from Classic Elite Yarns, Post Wedding Shrug, inspired by this one. The modifications: eliminated the sleeve cuffs; added a crocheted shell edging to the whole thing. 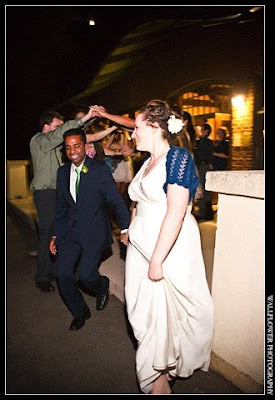 I knit the piece flat, blocked it to my satisfaction, stitched closed a few inches at each end to form the arm holes, then applied the crocheted edging all around. I used KnitPicks Shine Worsted in "sailor" and this project only used 3 or 4 little balls, if I recall correctly, making it quite the little budget-friendly project. 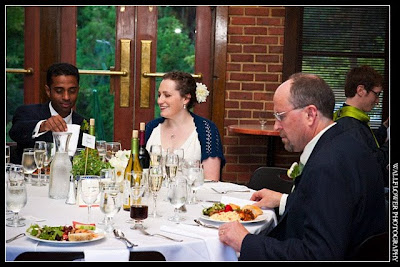 I really love the finished product, though I'm not sure when I'll have use for it again.
Posted by ro.bin at 3:49 AM No comments:

I don't want to set myself up for failure, but I'm going to give another go at this blog. The wedding is done, and in theory I have more time for crafts and for blogging about crafts. We'll see how it goes...

For the past 3 weeks, I've been hard at work on a felt stocking for Raj. Everyone in my immediate family has one of these beauties, and it was a given that Raj would get one, too. Progress has been a bit slow, even with all these slow nights at work the past few weeks. But I'm starting to feel like I might be on the passing the summit on this project. 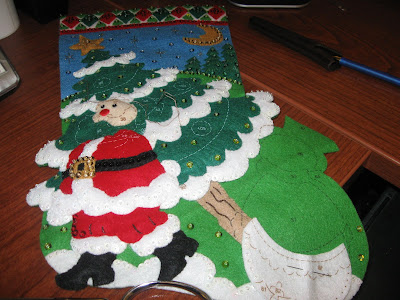 I'm hoping to get a few posts up soon about some of the things I made for the wedding. :)